A Tale of Two Covers 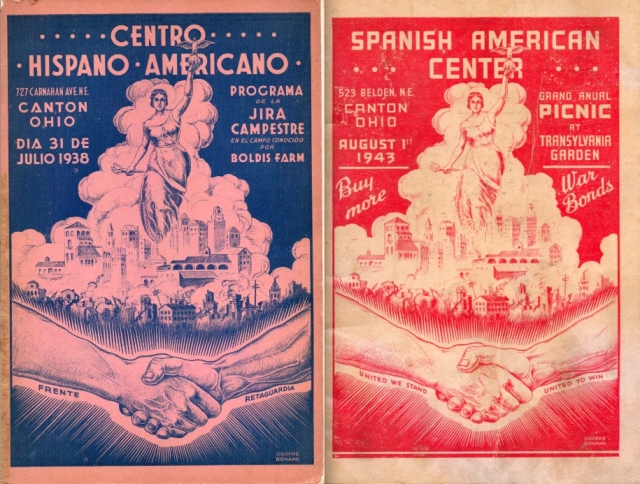 Thanks to Kathy Pujazón Meers, who has lovingly preserved her grandfather’s papers, we can now study and enjoy the programs printed by the Spanish American Center (Centro Hispano-Americano) of Canton, Ohio, for the annual summer picnics hosted by and for the Spanish colony in that city, beginning in 1936. Kathy is in the process of scanning all of this material (thanks, again!), and we hope to soon be able to upload the entire collection. It’s a gold mine for the historian or history buff.

The program covers, particularly in the early years, are beautifully designed. As we were going over the first batch of scanned programs that Kathy has sent to us, we noticed a striking fact: the 1943 cover –which focuses on the US war effort in World War II– recycles and repurposes the cover from five years earlier –which focuses on the then-ongoing Spanish Civil War.

A fine essay could be written about this repurposing and recycling. About how the repetition suggests that the Canton colony almost certainly saw World War II as a continuation of the struggle against Fascism that had begun in Spain in 1936. About how the handshake of the 1938 cover would seem to span the Atlantic – Republican Spaniards at the front, in Spain, reaching out to Republican Spaniards in the rearguard, like those in Canton, Ohio–, whereas the handshake in the 1943 cover seems to be between Americans, united in stance, united in victory. About how in five years the language of the program cover has switched from Spanish to English, pointing to the process of assimilation that was certainly accelerated by the outcome of the Spanish Civil War and the outbreak of World War II.

In sum, even though the two are almost identical, the 1938 cover seems to emerge from a community that is still straddling two countries and two languages, whereas the 1943 cover points to a community that knows that it has passed the point of no return.  The implications of that knowledge will powerfully condition the experience of the immigrants, and, in particular, the experience of their children.