May We Toot our Own Horn for a Sec?

We recently put out a call to some of our friends and collaborators, to ask them to reflect on what our project has meant to them and their communities across the United States. The response has been very heartwarming.  Here are excerpts from some of the notes we’ve received.  Thanks to all who responded.  We love you too!  This kind of feedback is what keeps us going, through thick and thin.  There’s much work to be done.  If you’d like to support us, please consider purchasing our book Invisible Immigrants:  Spaniards in the US (1868-1945). Founded in 1868, the Centro Español/La Nacional is New York’s oldest Spanish immigrant organization. Once a center of the social lives of thousands of Spaniards in New York, La Nacional fell on hard times when, throughout the second half of the twentieth century, the immigrants dispersed and assimilated.  But now, at the start of the twenty-first century, thanks to the renewed interest of the immigrants’ grandchildren, together with the arrival to New York of a substantial number of young Spanish expats, new life has been breathed into our organization.

The work of Spanish Immigrants in the United States is invaluable to all of us, because it constitutes the bridge to the past that we –both the descendants of the immigrants, and the new arrivals– urgently need, in order to understand and honor our past, and to chart and navigate our futures.

My name is Michael Campos Munoz. I am the past Chairman of the Archie Green Fund for Labor Culture, and the founder of the Hawaiian Spaniard Project. We are the descendants of the eight thousand Spanish immigrants who found their way to the United States via Hawaii. I am also a member of the Club Español in Woodland Ca and the Rocklin Spanish Club. These two clubs were formed to support and improve the lives of Spanish Immigrants and have existed in one form or another since the 1920’s.

Spanish children of migrant farm workers, near Vacaville, CA, c. 1925.  Notice the tents in the background.

Until Professor James Fernandez began to collect and record the voices of our elderly parents and grandparents, very little had been done. Our rich history was dying, becoming invisible. James Fernandez has brought our historical memories back to life.  Accumulated in  his vast files are first and second hand accounts of the Spanish American War (1898), the building of the Panama Canal, The Vacaville Pruners Strike 1932, The Spanish Civil War 1936, the diaspora of thousands of Spaniards to North America between 1898 and 1940. They include forgotten memories of food and culture, our left wing roots brought from Spain, erased from our memories by Francisco Franco, Joe McCarthy and the anti communist union purges of the 1950’s .

His collection of photographs is incredible, and through social media, he has re-united families in Spain and the United States. He has given us a face of our own in the Spanish speaking community of Americans. Most Americans are dumbfounded when they learn that working-class Spaniards took part in the modern immigration history of the US.

I can only compare his work to that of Alan Lomax the renowned musicologist, and the modern day folklorist, Archie Green.

Ángel Rañón and José Oural, at the Centro Asturiano in Tampa, Florida.

For years, many of those who comprise the Spanish colony in Tampa wondered how we fit into the big picture of Spanish immigration in the United States. We were curious and suspected that we were a significant piece of the puzzle, but we could not be sure.  Dr. Fernandez’ stellar research on a national level has resulted in giving form to the whole of the picture.  In so doing he has enlightened us and confirmed our place in the larger story.  Of course, for this we are grateful, but for the Centro Español of Tampa in particular, his efforts have also served to energize and encourage our now 126 year old institution to continue in its quest to preserve, honor, and celebrate the legacy of our founders and those that came after.  His methods, curiosity, scope of inquiry, devotion, and unflagging energy are an inspiration.

Our grandparents came here from Spain and their children grew up as life long friends. I

am a second generation born here in the United States and feel the Spanish American Center Club has made me the person I am today.  When the club first got word that you wanted to visit, the older members were not sure what you wished to know or how important your project would become.  Facebook has been the best social media out there for everyone to see the interviews you did and post the information you have gathered.  Jim, your project has brought all of us here in the United States and Spain together.  Through pictures that you have scanned and posted, families across the world have been reconnected.

You lit a passion in myself to learn more about the Spanish people who came to Canton.  I started the project of gathering obituaries, pictures of headstones, and funeral cards for past members of the Spanish American Center.  I am interested in finding what jobs they did here, where in Spain they came from, where they might have lived in Canton, who are their family members, etc.  I found an obituary just last week for Florentino Fernandez who died at the age of 22.  He was the first Canton soldier to be killed in the North African area March 1943 during World War II.  He received the Purple Heart posthumously. The members of our club have told and shown me their appreciation for my interest in this project.

We need to continue with what our grandparents started when they came to America, preserve our heritage, continue the values they passed down, the importance and closeness of family, traditions, and recipes.

Your continuation of this project is so important.  Little did I know that there were so many of our Spanish communities throughout the United States.  Many of these communities no longer have active clubs. You have traveled to meet many of the descendants of our ancestors who came to America, and to document this history that can not be lost. You just have to see how many people follow your Facebook page, Spanish Immigrants in the United States, to realize the impact you have made on all of us.

Thank you again for all that you have done and bringing us together. 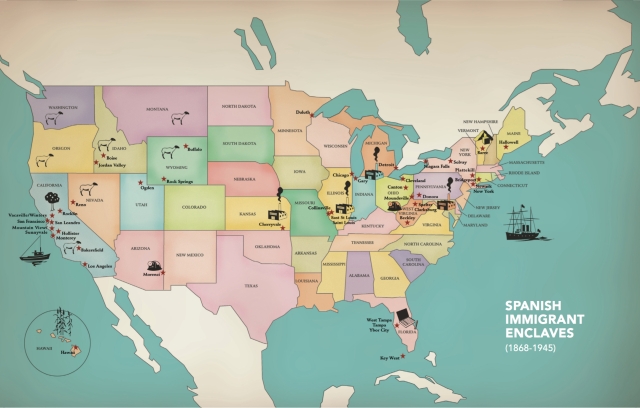