A Priceless Snapshot of Spaniards in Brooklyn, 1892

SPANIARDS IN THIS CITY

Brooklyn Has Quite a Large Colony of them

They Learn Very Little of the English Language and are Exceedingly Clannish— Comparatively Few of them Become Citizens, but a Majority of Those Who Do Vote the Democratic Ticket

Some interesting particulars respecting the Spaniards and Cubans living in Brooklyn were recently learned from a well-known citizen, whose office is in the Franklin building, on Remsen Street.  For very nearly twenty years, Mr. Bailey has been the legal adviser of what may be called the Spanish colony in this city and is personally 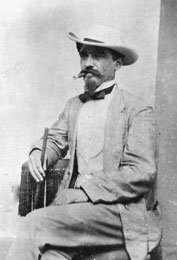 Serafín Sánchez, Villaviciosa, Asturias, 1839 – Brooklyn, New York, 1894.  Sánchez is buried in Brooklyn’s Greenwood Cemetery.  Sánchez was partners with Ignacio Haya; their cigars carried the “Sánchez y Haya” label.  Since tobacco and cigars were at the heart of New York’s Spanish colony in the late nineteenth century, the connections between Gotham and Tampa, Florida were numerous and tight. [photo credit: http://cigarsoftampa.com/serafin-sanchez.html]

acquainted with a large majority of its members.  He has also made so many trips to Cuba that he is now almost as much at home in Havana as he is in the first ward, and has, of course, acquired a very intimate knowledge of the habits and modes of life of the men with whose business interests he has had so much to do.

“The exact number of Spaniards and Cubans in Brooklyn,” said Mr. Bailey, “is uncertain, but approximately I think there are about six hundred.  I base that estimate on a list I have here of the members of a society tow which many of them belong.  Although they are a very clannish people, they do not herd together in any one or more localities, but are to be found scattered all over the city.  The majority of the Spaniards in Brooklyn have come from Asturias, one of the northern provinces of Spain, on the Bay of Biscay, and Cubans have come from Havana.  i ought to qualify my statement about the Spaniards and explain that very few, if any, ever come direct tot eh United States from their native country.  They almost invariably come here by way of Cuba.

“As a general thing have they any knowledge of the English language?”

“No; when they arrive here they are unable to speak English.  They have no knowledge at all of the English language.”

“How do they work to acquire it?”

“They very seldom do acquire it.  The majority of them cannot speak the language.  Not more than one Spaniard in every one hundred of those who come to Brooklyn ever learns more of the English language than just enough to make himself understood in the simplest and most necessary affairs of daily life.  They are, as I have already told you, very clannish, and here in Brooklyn they work together in tobacco and cigar factories where Spanish is the only language spoken and the men do not feel that they are at a disadvantage in consequence of not being able to express themselves in English.”

“What habits do they bring to this country as regards industry, economy, sobriety, honesty and morality?”

“They compare with the majority of foreigners who come here most favorably.  I invariably find them hardworking, economical and sober, and I say, from my long experience with them, they are strictly honest and, as a class, their morals will stand comparison with this of emigrants from any other country.”

“Have they any means on their arrival in the United States?”

“I never knew one yet to arrive in this country in a destitute condition.  They all bring some money with them, and they all know a trade —that is, they all know how to make or pack cigars.  The Spaniards who come here from Cuba never desire to return there —at least I never knew one who did.”

“To what religious denomination do they belong?”

“If they belong to any at all it is the Catholic.  They have no church of their own in Brooklyn —that is, there is no church that is distinctively Spanish —and so I suppose if any of them attend church they go to the one nearest there homes.

“Do many women come here from Spain or Cuba?”

“No, very few, and almost all the men who come are bachelors.  After being here a few years a good many of them marry American women and a few marry women of their own race.”

“Do the Spaniards and Cubans become citizens of the United States as soon as possible after their arrival in this country?”

“No:  comparatively few of them become citizens of the United States.”

I believe it results from two causes.  The intense love they have for their native country is one and the other is what I cannot better explain than by saying it appears to me to be a remnant of the ancient Hidalgo pride that keeps them from swearing allegiance to any other country.  Those who do take out naturalization papers are generally men who have accumulated property and desire to revisit their native country, where the military law is as strict as it is in Germany and they wish to be protected from the draft.  The native born Cubans are more likely to become citizens of the United States than are the Asturias, because a Cuban per se does not like to be called a Spaniard.  This who do become naturalized take a great interesting the politics of this country.

“With which of the two great parties do they affiliate?”

“The great majority of them in Brooklyn vote the Democratic ticket, which may to some extent be owing to my missionary work, because having been so intimately associated with them for the last fifteen or twenty years in business and social life, they have not hesitated to follow my advice in political affairs and consequently have joined the Democratic party, with which I have always been connected.”

“What opinions do they hold on the question of the annexation of Cuba tot he United States?

“The Cubans are somewhat divided on that question.  Some of them are in favor of annexation to the United States and others prefer independence and a republic.  Some of the more liberal of the independents go so far as to advocate annexation in fat future, but independence first.  The Spaniards as a rule are conservative.  Occasionally you will find one who is so imbued with the democratic and liberal ideas of this country that he is in favor not only of the freedom of Cuba, but also of a republic in Spain.”

“What Spanish and Cuban societies are there in Brooklyn?”

“Are there many naturalized Spaniards or Cubans living in Brooklyn who from small beginnings have worked their way up and become influential and wealthy men?”

“There are many men of that description, all of whom are well known in Brooklyn.  I can mention Joseph A. Vega, Antonio González, Serafín Sánchez, Vicente Guerra, Salvador Rodríguez, Francisco García, Silverio Pérez, Celestino and Joaquin Rodriguez, Jesus Mendez, Celestino Diaz, Marcelino Lopez and the Balbín brothers.”

1 Response to A Priceless Snapshot of Spaniards in Brooklyn, 1892