Sav(or)ing the Traces of Spain in the US: Café Bustelo

So what’s left? is very often the question we get once we’ve described –to college classes, conference attendees or documentary audiences– the diaspora of tens of thousands of Spaniards who put down roots all over the US in the late nineteenth- and early-twentieth centuries.

The visible, tangible legacy of this relatively unknown chapter of the shared history of Spain and the US, is somewhat scarce.  We can point to the built environment of Ybor City and West Tampa in Florida  –a handful of buildings, cemeteries and monuments that, to the trained eye, might tell the story of the Spanish cigar workers who helped make Tampa what it once was.  Or we can gesture toward a couple of remaining structures in New York’s West Village –the headquarters of La Nacional, a Spanish benevolent society founded in 1868, or the building of Nuestra Señora de Guadalupe church, which was founded in the early years of the XXth century to minister to the neighborhood’s burgeoning population of immigrants from Spain.  The Spanish Society of Saint Louis, MO still keeps up the building purchased by the immigrants, who worked in the nearby zinc factories, almost 100 years ago.  But in so many other parts of the country, “what’s left” of this historical experience lives mainly in the hearts, minds and family archives of the descendants of the immigrants.  That’s one of the reasons why we so often refer to our protagonists as “invisible immigrants.”

Some markers of this history, though, are actually out in plain view, right in front of us, though they often go unrecognized because of a lack of awareness and information.  How many consumers of Goya Foods or Bustelo Coffee, for example, know that the founders of those companies hailed from the Iberian Peninsula?  To tell the story of these iconic latino brands, we need to immerse ourselves in the early years of the twentieth century, when substantial numbers of Spanish immigrants were arriving and setting up businesses amidst the arrival of much larger numbers of Spanish-speakers from other countries.

Get out the coffee pot…

Courtesy of the Mora family.

…that in 1929, Gregorio Bustelo, a Spaniard –born in Luarca, Asturias– who had emigrated to Cuba before settling in New York, opened the Bustelo Coffee Roasting Company at 1364 5th Avenue, between 113th and 114th Streets, right in the heart of a neighborhood that at the time was already well on its way to becoming thoroughly Latin?

Bustelo developed a signature blend and roast, catering to the tastes East Harlem’s coffee lovers, that would grow into an iconic product and brand for generations of latinos all over the United States.

…that East Harlem had begun welcoming a major influx of people from Puerto Rico and other latinos during and after World War I? José Mora, of Tormón, Aragón, at his Fifth Avenue Hardware store, directly across the street from Bustelo’s first store.

Puerto Ricans had been granted US citizenship during the war, in part to make them eligible for the draft. Around the same time, significant numbers of people from the island began migrating to New York, many of them settling in what until then had been primarily an Italian, African- American and Jewish neighborhood.  Smaller but substantial numbers of Cubans, Spaniards and other Spanish-speakers also moved into the neighborhood in those years; so many, in fact, that the language that they all shared gave rise to the neighborhood’s new names: Spanish Harlem and El Barrio.

…that like Gregorio Bustelo, many of the small business owners of El Barrio had been born in Spain, or were children of Spaniards who had emigrated to Cuba or Puerto Rico?

Fifth Avenue Hardware, right across the street from Bustelo’s storefront, for example, was run by two Spaniards, best friends from Aragón who emigrated to New York and ended up marrying two sisters from Puerto Rico.  In fact, the only known photograph of the original Bustelo storefront appears in a family photo taken by the hardware store owners around 1931. 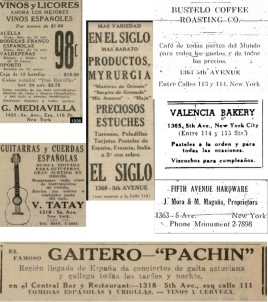 Ads for some of the small businesses on the stretch of 5th Avenue between 110th and 116th Streets, 1930-1940.  With the exception of Taty Music Store (whose owners were Puerto Rican-born children of Spaniards, these were all owned and run by Spanish immigrants.

…that Valencia Bakery  was a mom-and-pop bake shop run by immigrants from Valencia, Spain,  just next door to that hardware store, and just across 5th Avenue from Bustelo’s?

Good coffee always calls for good baked sweets, and vice-versa; the pairing of Bustelo’s rich and dark espresso brew with the Valencia’s pastelillo de guayaba, a kind of guava turnover, was –and is– a match made not in heaven, but in Harlem, Spanish Harlem. Oldtimers still remember –and still savor– this winning combination. Tasting them today is probably as close as we’ll ever get to time-travel.

The Metro North railroad viaduct that runs down Park Avenue was completed in 1897; the open stretch beneath the viaduct between 111th and 119th Street had been home to informal pushcart markets almost since then. In 1939, Mayor Fiorello Laguardia officially inaugurated the Park Avenue Retail Market, which the locals, in perfect Spanglish, immediately dubbed La Marqueta.  It quickly became a hub of barrio life, and it is currently being revitalized, by innovative latino businesses like Sprinkle Splash Bakery.

…that Casa Latina is a surviving example the kinds of music stores that in the 1920s, 30s, 40s and 50s, were crucial businesses in ethnic neighborhoods like El Barrio?

Back in the day, not only would these stores sell recorded music, sheet music, radios, gramophones, record players and musical instruments, they were also often meeting places for musicians looking for work and for band leaders looking for instrumentalists for performances or recordings. Later on, before Ticketmaster and its followers, music stores like Casa Latina would even sell tickets to concerts and shows. Representatives of the major record labels stayed in close contact with El Barrio’s music store owners, not just to urge them to promote the music they were producing, but also to learn from them about evolving musical tastes and preferences in the neighborhood. Some music stores were even headquarters for record labels.  Because the confluence in El Barrio of musicians from all over the Spanish-speaking world, in close contact with musicians working in jazz and other American musical idioms, would give rise to new latin musical forms like salsa.

The unofficial national anthem of Puerto Rico, “Lamento borincano” was composed in a music store in El Barrio in 1929, by Rafael Hernández,  an afro-Puerto Rican who, with his sister Victoria, ran Almacenes Hernández, a legendary shop at 1724 Madison Avenue.  It’s probably not too much of a stretch to imagine Hernández sipping Bustelo coffee as he scribbles down the lyrics, notes and chords of this now mythical song. Before settling in New York, Hernández had performed in Europe in the military band attached to the famous Harlem Hellfighters (369th Infantry) that fought in World War I.  This band is often credited with introducing jazz music to Europe.

Gregorio Bustelo was known to sponsor stage shows and radio broadcasts of the new music that was brewing on the streets of Spanish Harlem. The Teatro Hispano was once known as the Mount Morris Theater, originally a venue for yiddish-language vaudeville, starting in the 1920s.  East Harlem locals and Spanish-speakers from all over the city would flock to El Barrio to catch the Spanish-language stage shows and film screenings, that featured artists and films from all over Spain and Latin America. In 1934, the “King of Tango,” Carlos Gardel, one of the world’s first true megastars, attended the opening of his film “Cuesta Abajo” at the Teatro Hispano, along with an overflow crowd of several thousand people.  Legend has it that Gregorio Bustelo would keep  newspaper clippings of the show-times by the cash register of his store, to be prepared for the brisk business that would ensue every time a show let out. 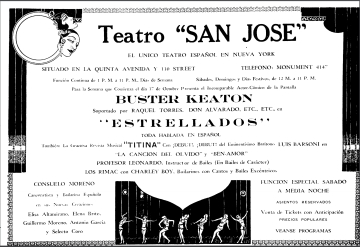 Many of our Spanish immigrants owe their commercial of professional success largely to the clientele made up of their Spanish-speaking “brothers” or “cousins” from Spanish America.  And this holds true not only for entrepreneurs in the food and beverage industry, like Gregorio Bustelo and Prudencio Unanue, the founder of Goya Foods. Because many other prosperous Spanish immigrants –in the hospitality industry, in music and entertainment, in language teaching or bilingual education, for example–owe their success in large measure to the patronage of the large number of latinos who arrived to the US from countries other than Spain. The commingling of Spaniards with Puerto Ricans, Cubans, Mexicans, Dominicans and other Spanish-speakers is a key part of the story we’re struggling to reconstruct and understand.

So brew yourself a cup of espresso, close your eyes, and savor a bit of what’s left of this almost lost world.

3 Responses to Sav(or)ing the Traces of Spain in the US: Café Bustelo