This gem of an article, from the St. Louis Post-Dispatch (1934), reminds us of the importance of the Spanish colony of St. Louis and East St. Louis, and of the significant role played by Spaniards in the development of the relatively new sport of soccer in the early decades of the twentieth century.  We’ve had the pleasure of interviewing descendants of many of the players cited in this article, and of digitizing their amazing family photos, some of which we reproduce here. 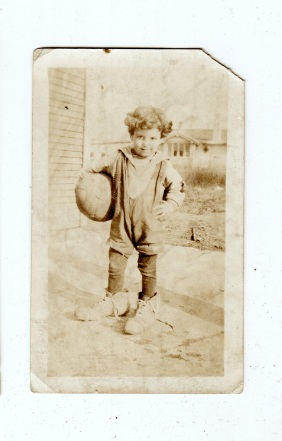 Scanning the probable starting lineups of the Ben Miller and Hellrun-Grimm teams, which met this afternoon in a St. Louis Soccer League match, at Sportsman’s Park, one finds six players of Spanish extraction.  In view of the fact that St. Louis is not notable for the extensiveness of its Spanish colony, this predominance of Spanish names is perhaps worthy of a little explanation.

Here are the players who, in all likelihood, will give a Spanish flavor to the game:  Julio Gonzales [sic], Arturo Garcia and Luis Garcia of the Hellrungs: Manuel Cueto, José Díaz and Arturo Díaz of the Millers.

There are, furthermore, José Rodriguez and José Garcia, with the Marre club, and until a week ago Cecil Rodriguez was with the Centrals, so that there were Spanish boys on every club in the league and almost in sufficient number to form a good team.  With the possible exception of Art Diaz, every one is regarded as a star and a regular player with his club, and several are ranked with the best players in the league.

This array of teams, averaging 18 players a club, represents the most extensive attempt to develop soccer players that has been made by any single group in this community, possibly in the country,  There are, each week, one hundred of more Spanish-American soccer players in active competition here. All of these players graduated to the professional league through the same channel namely the Spanish Sport Club, which is the athletic branch of La Sociedad Española, center of the social life of the Spanish colony here and in East St. Louis.  The Society sponsors four amateur clubs playing in St. Louis and supplies the players who compose two more teams in East St. Louis.  On this side are La Sociedad Española, in the senior division at Carondelet Park, the American Zinc, playing at Forest Park, the Caballeros I, in the junior division of the Municipal League, and the Caballeros II, in the Community House League.  On the other side of the river are the Waverly Club and the Unions.

This array of teams, averaging 18 players a club, represents the most extensive attempt to develop soccer players that has been made by any single group in this community, possibly in the country,  There are, each week, one hundred of more Spanish-American soccer players in active competition here. 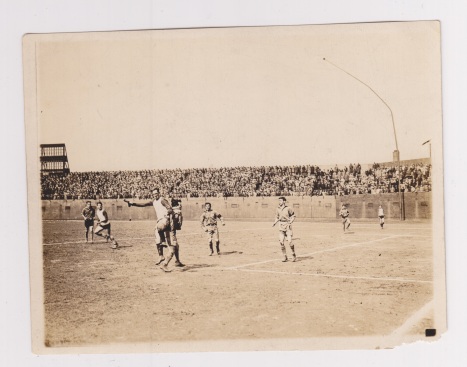 Since they are all striving toward the same goal —development to the point where they will be sought by professional clubs, the success of their efforts may be fairly judged by what they are accomplishing in the St. Louis Soccer League.  If all nine of the players above named could be grouped on one club and their ranks augmented by two others of established skill, possible Henry “Red” Diaz, now with the American Zincs, and Joe Menendez, now attending Illinois Wesleyan College, they would form a team which would make a favorable showing against any professional club in this country.  Menendez, not yet well know to St. Louis fans, was at center halfback for the Spanish club which lost to the Holy Rosary team in the Junior championship last spring.

One of the striking things about these young Spanish-Americans is that all learned their soccer here.  In fact, all except Joe and Henry Díaz, who are twin brothers, were born in or near St. Louis.  The twins were born in Spain.  Joe Rodriguez, goal tender for the Marre club, is the only one of the group who has had the benefit of seeing a great deal of European soccer.  He spent a couple of years in Spain after leaving college.  Spanish football fans believe they have the world’s greatest goal tender in Zamorra.  Rodriguez patterns his game after that of Spain’s idol.

Soccer received its initial stimulus in the then very small Spanish colony here in about 1908-09.  Down on South Broadway, grouped close about the 7200 block, in the shadow of the zinc furnaces, were a number of Spanish families, many of them recent arrivals, and almost all from the northwest portion of Spain.  At the time they left their native land, where they were largely engaged in mining and smelting works, they had developed a liking for soccer, a game which was sweeping the country.  In seeking recreation here they turned to a game with which they were familiar. Hence, one José García, now dead, and Dan Menendez, a tavern proprietor on South Broadway, had no difficulty getting volunteers for a team which was given the typically Spanish name “Asturias.”  They entered a league which played its games on Sunday afternoons on grounds just east of Manion’s Park.  In that Asturias club, cornerstone of the present day widespread organization, were Tirso Diaz, Manuel García, Jack Menendez, Emilio Prado, Henrico [sic] Fernandez, C. Busto, F Valdez (whose son is nos playing with La Sociedad Española club), Henry Menéndez (first Spanish player to join a professional club here), Joe “Pepe” Garciá (deceased), Dan Menendez, the leading spirit of the soccer movement, and J. Fernandez.

Formation of the Municipal Soccer League in the season 1912-13 gave the Spanish lads a chance to further develop their new club and they have been at it ever since, and in recent years they have progressed to the point where they are having a very strong and healthy influence on the local professional game, even to the contribution of a referee, Prudencio García, a Municipal League official and one of the best in the city.  Soccer is one of the chief concerns of the growing Spanish colony and the measure of success the effort has enjoyed is certain to stimulate further interest and further growth.